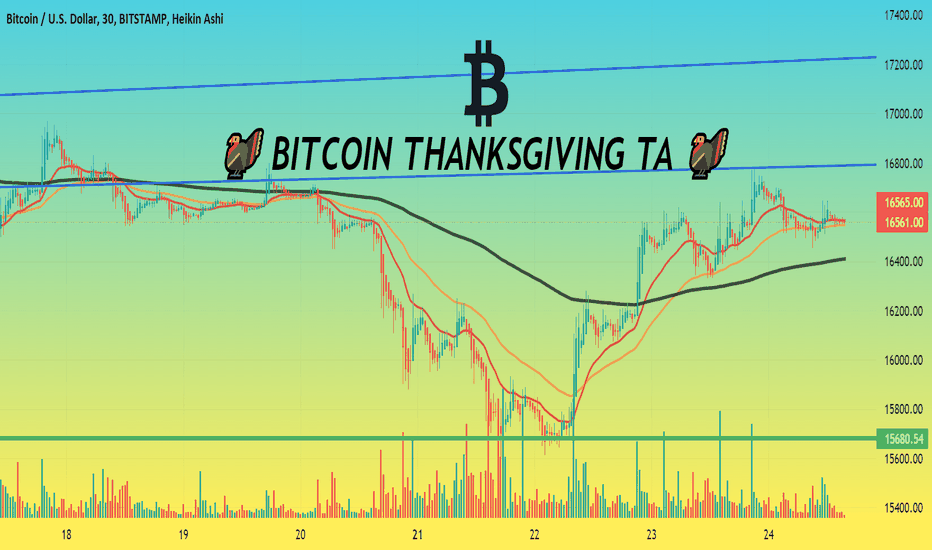 ?Just a real quick Bitcoin Thanksgiving TA here for you guys. ?
It’s nice to see that bitcoin following up from our previous idea has managed to touch the bottom of that channel we had which is slowly moving up as it’s at an angle. For now we’ll just say $16,800 as that is where things stopped short of a breakthrough and you see what’s followed.

?We haven’t exactly lost that $16,450 level of support which we already saw once so that’s nice to note but we’re at this real tricky spot again with things considering we hit that resistance spot on as well. Puts both teams in a tough position but bears could definitely continue and start the next helix flip of our 20/50 EMA’s in red and orange. Now if bulls can manage to keep pressure and have us avoid flipping those EMA’s and losing support then bulls will stand a good chance at getting to retest that $16,800 mark again quite possibly.

?Either way what happens next will help determine the next trend and direction. Very curious to see this play out. Especially considering Bitcoin tends to do some pretty wild moves on holiday’s and if XRP is any sign, hopefully we can see Bitcoin really regain some ground. If not we’ll expect to lose that 200 EMA and deal with the harsh wave again and have to find the next current to sail with.

?Leaving it at that for now but if you’d like to leave a like or follow it’d be much appreciated. Simply an observation as always with me sharing what I simply see. Wishing well and the best with your thanksgivings! Thank you for tuning in and keep amazing!