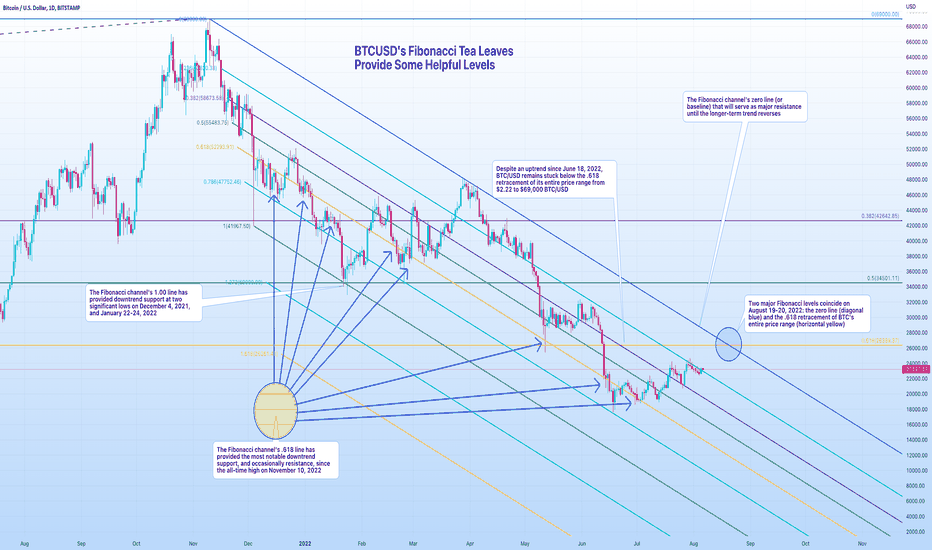 BINANCE:BTCUSDT ( BTC ) has been in a downtrend since its all-time high of $69,000. But it has trended higher in a fairly choppy pattern since its major low on June 18, 2022. Many debates have arisen over whether BTC and other cryptocurrencies have found a lasting bottom that will lead to another bull market. The same questions and arguments arise for equity indices, which have experienced a bear market along with cryptocurrencies.

The Debate Whether BTC Has Formed a Lasting Low

Many different methods—fundamental and technical—have been explored to solve the question of where BTC’s price goes next and whether a rally back to all-time highs has begun or whether another series of price declines lies ahead.

One fundamental method some analysts use is called on-chain analysis, but that has likely been the basis for opposing conclusions depending on the biases of the analyst. Glassnode’s on-chain analysis has suggested recently that an inflection point may require the capitulation of long-term holders (HODLers). In Forbes this week, Glassnode is quoted as saying: “Bottom formation is often accompanied by shouldering an increasingly large proportion of the unrealized loss.” It explained further that “for a bear market to reach an ultimate floor, the share of coins held at a loss should transfer primarily to those who are the least sensitive to price, and with the highest conviction.” In any event, this article will not attempt to comment on the validity of any particular fundamental view—the fundamental view provided only for context and newsworthy information.

Fibonacci ratios can be used in a variety of ways in technical analysis . Fibonacci analysis does not have any particular edge over all other forms of analysis, but instead, it is one of many tools that may offer helpful information in analyzing the price activity of a liquid security.

No form of technical analysis , including Fibonacci, is infalliable, and none serves as a crystal ball that predicts every price move or wiggle. Simply put, technical analysis does not offer a photographic view of the future of price. If it did, markets could not function effectively or efficiently (unless the photographic view of the future were limited to a select few by cost or other means).

But using Fibonacci ratios to analyze price may help identify both time and price areas that can be important to watch. In particular, it helps to see how price interacts with such levels.

Fibonacci retracements apply the Fibonacci ratios to an identifiable price move between a high and a low or between a low and a high. These ratios are applied to the distance between a selected high and low so that as price retraces a previous move, the ratios can be viewed as either support or resistance.

For BTC’s major retracement levels, see the horizontal levels on the primary chart above and the horizontal levels on the Supplementary Chart 1 below. The primary chart above shows the retracement levels from the all-time low ($2.22) to the all-time high ($69,000). Retracement levels tend to have greater significance when, as here, they apply over a long period of time and cover price action at the highest degree of trend. (No swing high or low has more significance than an all-time high and all-time low of a security or other asset.)

The fact that price has remained contained below the .618 R for almost a month and a half has bearish weight, though it’s not conclusive. The importance of this level combined with the fact that another important longer-term Fibonacci level lies very near to it (a Fibonacci cluster ) suggests that this area may attract price in the near term. It will be important see whether these levels repel price, or whether price can break above them.

The next chart shows the Fibonacci cluster described. The .618 R level of BTC’s entire range has been drawn on the chart next to the other key level, the .618 projection of the first leg in the bear market as measured from the start of the second leg. This .618 projection lies at 25,950.
Supplementary Chart 1: Fibonacci Cluster with Two Longer-Term Fibonacci Levels Shown in Yellow

A Fibonacci channel is another approach to Fibonacci. It shows Fibonacci relationships in a more dynamic way. The zero line works as a baseline from which all other Fibonacci levels are then drawn parallel using Fibonacci proportions. The zero line contains price in much the same way as a regular uptrend or downtrend line.

The primary chart above shows the Fibonacci channel for BTC’s price. It has identified a significant number of support and resistance areas. The most prominent area is the diagonal .618 line which has acted as support a number of times such as in February and March 2022 and in May 2022. The .618 diagonal line also operated as resistance a few times (e.g., December 2021 and mid-January 2022).

Finally, over the past 10 days, it appears that BTC’s price has been working to push through the .236 diagonal line (teal). It has pushed above it slightly on several days but closed back below it: note the candle wicks piercing the line with closes below it. Today’s push above the .236 diagonal line may end the same way as prior days.

But if BTC holds the .236 diagonal line as support, the next level will be the zero diagonal line (blue), which was strong resistance at the end of the rally in late March 2022.

Importantly, to even approach the zero diagonal line (blue), BTC’s price must push through the major .618 R (horizontal yellow line) unless BTC’s price consolidates or pulls back and only later tries to reach the zero diagonal line on August 19-20, 2022. Why this date? BTC’s .618 R (horizontal yellow line) coincides with the zero diagonal line (blue) on August 19-20, 2022. See the blue-filled circle on the main chart above showing where the two levels coincide. August 19, 2022 is significant date for equity indices: it is monthly options expiration, which can sometimes, though not always, serve to shift the direction of equity indices. This will be interesting to track.

The Fibonacci cluster described above includes the major . 618 retracement (horizontal yellow line on the main chart above) as well as the .618 projection (horizontal line shown in Supplementary Chart 1). As noted, the Fibonacci Cluster coincides with the zero diagonal line from the Fibonacci Channel on August 19-20, 2022.

Supplementary Chart 2 below shows some Fibonacci time analyses drawn vertically with TradingView’s Trend-Based Fib Time tool. The blue circles indicate where the Fibonacci proportions in time identified—or nearly identified, meaning within one to three days—a significant price move. The red circles indicate upcoming dates at Fibonacci proportions in time based on the length of time of the prior price swings.

Coincidentally, consider the August 19-20, 2022 date discussed above where a horizontal .618 R of BTC’s entire price range coincides with the zero diagonal line of the Fibonacci channel. This falls quite close in time to another Fibonacci time-based level: the 1.272 extension of the time span between March 28, 2022 high and the June 18, 2022 low (shown vertically in teal). Note also how other recent minor price highs in the past month were captured by this Fibonacci time-based tool.

Lastly, October 29 to November 1, 2022 also appears that it might have significance. Three golden ratios (.618, 1.618, and 2.618) based on the entire price decline in terms of time, and based on the March 28-June 18, 2022 price decline, fall in this period. It may be worth watching what sort of price moves lead to this level and whether other technical evidence supports a potential reversal there.
Supplementary Chart 2: Fibonacci Time Analysis