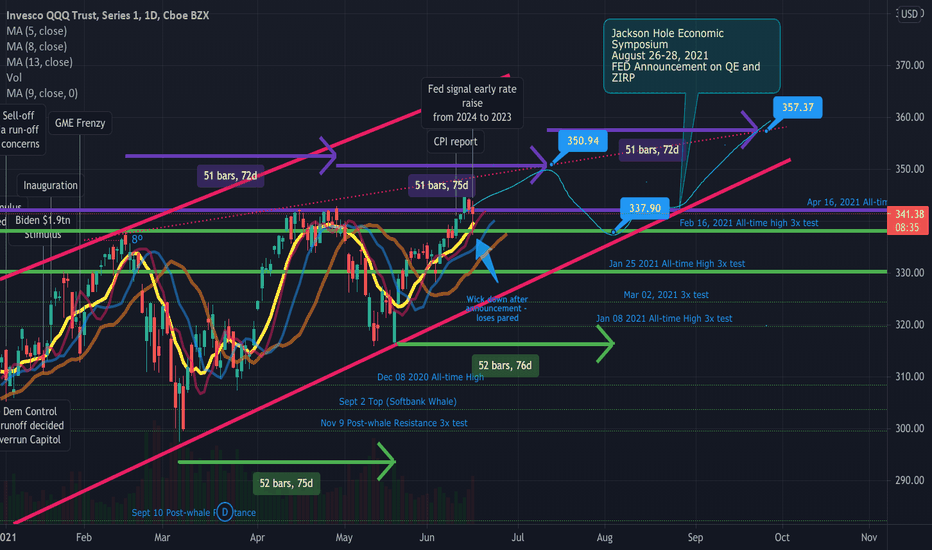 The Federal Reserve on Wednesday considerably raised its expectations for inflation this year and brought forward the time frame on when it will next raise interest rates.As expected, the policymaking Federal Open Market Committee unanimously left its benchmark short-term borrowing rate anchored near zero. But officials indicated that rate hikes could come as soon as 2023, after saying in March that it saw no increases until at least 2024. The so-called dot plot of individual member expectations pointed to two hikes in 2023.

Though the Fed raised its headline inflation expectation to 3.4%, a full percentage point higher than the March projection, the post-meeting statement continued to say that inflation pressures are “transitory.” The raised expectations come amid the biggest rise in consumer prices in about 13 years.

“This is not what the market expected,” said James McCann, deputy chief economist at Aberdeen Standard Investments. “The Fed is now signaling that rates will need to rise sooner and faster, with their forecast suggesting two hikes in 2023. This change in stance jars a little with the Fed’s recent claims that the recent spike in inflation is temporary.”

U.S. stocks dropped to their session lows on Wednesday after the Federal Reserve raised its inflation expectations and moved up the time frame on when it will hike interest rates next.

The Dow Jones Industrial Average turned sharply lower to fall as much as 382 points and last traded 150 points lower. The S&P 500 fell 0.3% on the day in volatile trading. The tech-heavy Nasdaq Composite last traded flat after falling 1.2% at its session low.

The Fed gave unexpected news to the market, resulting in a sell-off at 2PM EST that was nearly made back towards the end of the trading day at 3:45PM. TQQQ fell 3.2%, but is now within 0.2% of today’s opening price. Basically there was some selling panic, the price wicked down to the nearest price resistance and then returned.

I expect the prices to drift upwards in the coming weeks as positive economic news emerges. The next big question is for the August Fed meeting and what the Fed decides. The next several weeks will see this conversation play out.