Donald Trump in the White House and Theresa May in 10 Downing Street. They will open the door to more nuclear spending, no doubt. Prime minister May has already given a green light to Britain’s most expensive energy project, a heavily subsidized nuclear power station at Hinkley Point. Based on the most recent federal budgeting approvals, we expect that no U.S. nuclear weapons programs will want for funds. But, despite all the post-election industry euphoria, should we anticipate a full renaissance for U.S. commercial nuclear power? Is that…

In the latest attempt to provoke Russia, less than two weeks after the Russian ambassador in Turkey was assassinated, moments ago the Russian foreign ministry said in a statement that the Russian embassy in the Syrian capital of Damascus was shelled twice on Wednesday afternoon; the ministry calling it a provocation aimed at derailing peace settlement in the country.

It said a shell hit an inner yard of the embassy complex, while another shell landed near the diplomatic mission. De-mining specialists have been working in the hit area.

The full statement, via TASS, is below:

“At 13:00 and 13:19 [Moscow time] on December 28, the Russian embassy in Syria was shelled by terrorists. One mine, which, fortunately, did not explode, fell in the courtyard of the compound of the Russian diplomatic mission’s administrative buildings,” the ministry said in a comment.

“The second mine fell in the close vicinity to its territory. Combat engineers have been involved to defuse unexploded ordnance,” the comment said.

Moscow added that it considers “this new provocation by extremists opposing the peaceful settlement in Syria as the confirmation of their intention to continue sowing terror and violence, support the atmosphere of fear among residents of the Syrian capital, delivering wicked blows from their hidden shelters under the cover of the ‘human shield,” the ministry said.

The ministry also stated that there is still a real threat to the Russian embassy in Damascus and its personnel from terrorist groups:

“We have to state that there remains a real threat to the embassy in Russia and its employees from the terrorist groups entrenched in Damascus suburbs,” the Foreign Ministry said.

“This reaffirms the urgent need for prompt elimination of all such hotbeds of terrorism.”

While there has been no official reaction to the news yet, according to Bloomberg 10Y and bond futures rose to session highs, remaining inside past week’s ranges, after Reuters headlines of the embassy shelling hit; 10Y yield extended drop to 1.8bp, touching 2.541%.

In less than two hours, the US Treasury is set to sell 5 Year paper (which has traded -2.00% Off the Run in repo this morning), suggesting the massive short overhang on US paper continues. 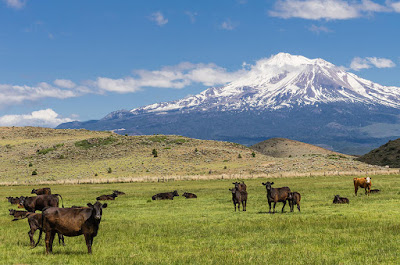 We delve into the agriculture space, specifically the Cattle Industry looking at how the technicals are shaping up for the sector in this video. There are still some Meat eaters left in this world.

The U.S. dollar has been on a tear that threatens to derail the oil price rally and OPEC’s effort to balance an oversupplied crude market, the editor of …

A stronger dollar will reduce demand for oil and tempt producers to exceed new limits on crude production.

Janet Yellen thinks the US Dollar is a ““cash is not a convenient store of value.”

Long-term she is correct. After all, thanks to the Fed, the $USD has lost 95% of its purchasing power over the last 100 odd years. Anyone who has kept their money in cash has generally lost money virtually non-stop.

However, in today’s world in which some $9 TRILLION in bonds are posting negative yields, cash isn’t looking so bad. Yes, you’ll still lose purchasing power over time… but the same is true if you buy bonds in Europe or Japan… just with more volatility.

Yellen’s disdain for cash isn’t that cash is a poor store of value… it’s that cash, particularly physical cash is one of the few “loopholes” in the current financial system that permits you to escape the insanity of Negative Interest Rates from Central Banks.

After all, there are two basic benefits to storing your money in a bank:

With NIRP in place, #2 is no longer a benefit. If anything storing your money in a bank with NIRP means losing money.

But you can likely achieve the same security by buying a home safe and sitting on physical cash there. Indeed, this is precisely what consumers in Europe and Japan have done since Central Banks in those two regions employed NIRP.

This is why Yellen and her ilk hate cash. Central Banks want to force consumers to spend money or invest in risk assets by punishing deposits with NIRP. But physical cash avoids NIRP entirely.

Will this stop Central Banks? No way.

Indeed, we’ve uncovered a secret document outlining how the Fed plans to incinerate savings in the coming months.

Survive the Fed’s War on Cash.

We are making 1,000 copies available for FREE the general public.

To pick up yours, swing by….

Outgoing US secretary of state John Kerry is to remark on the Israeli-Palestinian conflict this morning following Trump’s tweet-spanking and Israel’s security minister slamming Obama’s decision to abstain at The UN as “pathetic” accusing Kerry of “trying to make chaos” that will last past his tenure.

Delivered less than a month before President Barack Obama steps down, RT notes that the speech is expected to be the last work from his administration on the decades-old conflict.

After Kerry replaced Hillary Clinton as secretary of state in 2003, he made Israeli-Palestinian peace a priority and pushed for direct negotiations. However, they didn’t last the nine months they were expected to, collapsing in April 2014 without any tangible result. In June of that year, Israel launched a 50-day military campaign in Gaza.

Commenting on the upcoming speech, Israeli Public Security Minister Gilad Erdan said it was “pathetic to present a [peace] plan at the last minute when [Kerry] hasn’t managed in changing anything for his entire time in office.”

“It’s unfortunate that the Obama Administration, that erred for years in the Middle East, is trying to make sure that the chaos will last far past its tenure,” Erdan said late on Tuesday night, as cited by the Jerusalem Post.

“Kerry’s speech on parameters right before the end of his tenure will make sure that the Palestinians won’t agree to any sort of negotiations [with Israel] in the coming years and will [put] off chances of advancing peace.”

Honolulu’s Cafe 8 1/2 would like for you to know that if you voted for Trump then, (1) you’re not welcome in their establishment and (2) you’re likely a Nazi.  The tiny “eclectic mom-and-pop restaurant” is drawing a lot of attention after posting the following bright yellow sign in their window:

“If you voted for Trump you cannot eat here! No Nazis.”

The sign obviously rattled some Trump supporters who told Fox News the message “is discriminatory, and harkens back to the ‘racist and hate-filled’ days before statehood.”

“It’s childish and very unprofessional,” she said in an email. “… The restaurant owner doesn’t have to worry … I will not be stepping foot in that establishment.”

Willes Lee, former chairman of the Hawaii Republican Party and now president of National Federation of Republican Assemblies, told FoxNews.com the sign is discriminatory, and harkens back to “racist and hate-filled” days before statehood.

“Remember when Filipinos couldn’t go in certain places, or Japanese wouldn’t be allowed [in] many homes? And, it didn’t matter who they voted for,” said Lee, who is of Japanese descent.

“People should be able to get food without hearing a political message,” one apparent former customer wrote on Yelp. “I will never go back.”

Apparently, so many people lashed out at the sign on Yelp that the administrators had to post the following “Active Cleanup Alert” to notify everyone that they would be joining other Silicon Valley companies in censoring unsavory comments from Trump supporters.

Not terribly surprisingly, the restaurant was founded by a couple formerly hailing from the liberal bastion of San Francisco.  But don’t worry, one owner confirmed to the Honolulu Star-Advertiser that even if you’re wearing a Trump shirt they “don’t put anything different [in] your food”…which we think is Hawaiian for “we spit in your food excessively.”

According to the Honolulu Star-Advertiser, the café was founded by Robert Warner, a former hair stylist for Vidal Sassoon in San Francisco and former restaurateur in Seattle, along with his wife Jali.

Reached for comment Tuesday, Jali downplayed the sign’s supposed ban. She told FoxNews.com the restaurant is not actually asking customers whether they voted for President-elect Trump, and said even if they see a customer with a Trump shirt, “we don’t put anything different [in] your food.”

“Robert just wants to express how much he doesn’t like Trump,” Jali said. “If people take it personally or it hurts them, we cannot help. That’s why we say they have [a] choice if they want to come or not come. We don’t force them.”

Nothing like punishing 50% of the population which you deem to be intolerant by practicing some intolerance of your own.

Bit of a quiet week for major resource news. But several small items are suggesting some potentially explosive developments coming over the next several months. One of those comes in a place I’ve been watching closely the past year: the tiny Mediterranean island of Cyprus. Which this past week announced the winning bidders for an offshore licensing round — handing out acreage that could be prospective for some of the world’s largest natural gas targets. Cyprus’s Ministry of Energy, Commerce, Industry, and Tourism said it…

Submitted by Derrick Broze via TheAntiMedia.org,
Local activists attempting to hand out food and gifts were shocked on Thursday afternoon when Houston police forced the homeless to throw away the donations.  Around 1 pm on Thursday,  several …