Tesla – how to proceed 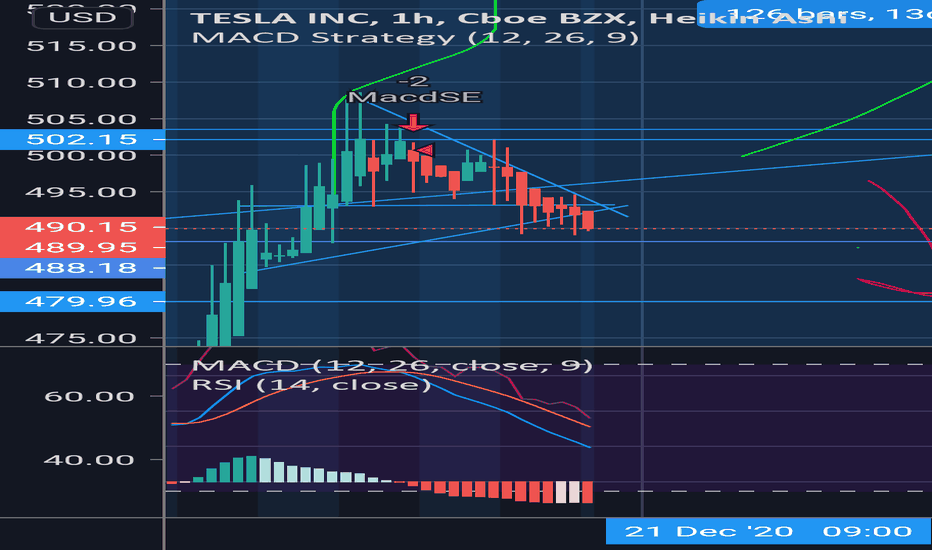 Hello dear traders and investors!
Looking at Tesla now during the weekend before market opens on Monday we should go through the different thoughts and possibilities that could occure this coming week of trading.

Tesla in the in 1 min chart looks underbought and could fly upward in the premarket. This could cause it to stay in the triangle that it currently exists which could break up or down around mid this coming week. But if we look at the 1h chart it seems like Tesla has reached a different triangle which if you compare to previous ones when Tesla spiked upwards does not look like it will be downwards. However. The volume for the 1h and 1D chart shows us that it is overbought and should go down to between 480-460 levels before a recovery to 500 and above. But his does not need to happen. When Tesla announced the 1-5 stock split the stock skyrocketed with some smaller triangles forming sideways like now for an example which means it could easily start going above 500 at any point.

Now to the strategies:
If you trade Tesla And Tesla manages to hit back to the triangle that is going upward towards 500 it would be wise to buy as it will most likely change direction upward from the down that it is now in the 1min chart. Trading thereafter should not be to scary for another 1-3 days atleast.
If you decide to go long on Tesla I would say that it would be good to just buy now and hold for a month regardless of if it goes down 7% as it will mostly recover and go beyond 500. You might miss a bit of profit but it will certainly be profitable inbefore the s&p500 inclusion.
If you short Tesla it would be a risk but could pay off as you will gain that 7% that others going long would miss and then buy in between 480-460 and ride it upwards towards 500 and above.
If you don’t want risks and would be okay with less profits I would suggest to just watch the stock with cash on the side to jump in soon as Tesla is inbetween a very difficult situation to predict. It is under a resistance but from previous times that the stock flied high it did not stop for any retracements, although this does not mean it won’t this time around. This means a strong buy above 500 but could see a downward movement so waiting till it reaches 480-460 levels to buy would also be good as 460 is a strong supportline now.

do not take this for financial advice. This is all but speculation.