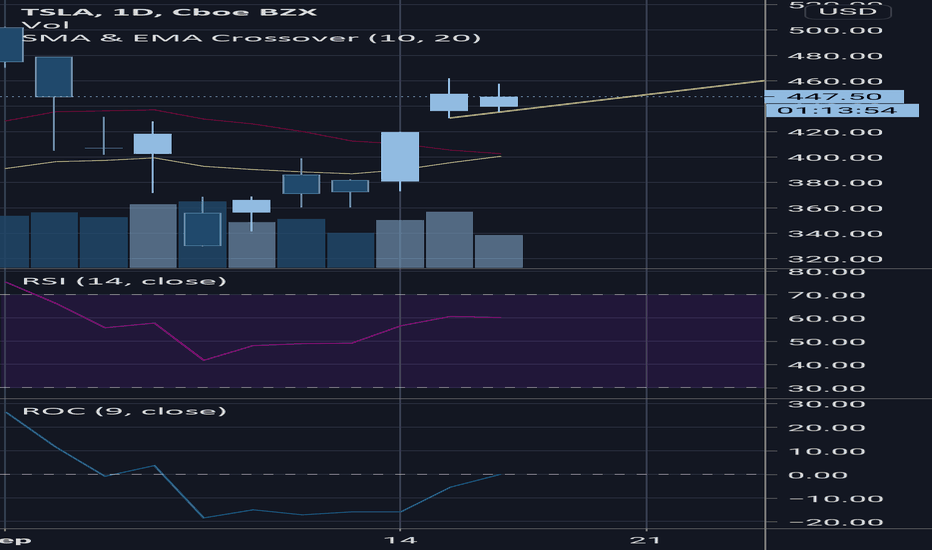 This is an idea about when to sell Tesla shares following on from the split and subsequent price fluctuation.

—
Summary – TL/DR: For a trading position taken near the recent trough in price (around $329), $427 is a balanced exit price, based on recent trend lines , that reasonably protects profits and avoids bear traps driven by price fluctuations.
—

With the price having dipped following on from the stock split (and possibly SoftBank induced market moving trades) but now having regained some of its value, this might be a good time to exit a position for those thinking of taking profit. This is also perhaps an opportune time for some profit protecting stop-loss implementation.

For the record, before we go any further, I am overall optimistic on Tesla performance (car and share price) and I think in the long term this stock has value. However, some people (myself included) might be thinking about protecting profits and setting stop losses based on recent price volatility .

1 shows that generally the Tesla share price has followed the support trend line and analysis based on trend lines generally have merit for this stock.

However, for those that have purchased recently, using this support line as an indicator for selling or setting a stop loss would not work because the entry price is far higher than the support line. Thus a trend line following the price closer to what it currently is is needed.

Drawing a trend line , 2, from the most recent trough (early September) would be better but would mean surrendering a lot of profit due to the line’s angle.

As the recent two daily sessions have shown, the price is starting to move sideways and is generally starting to form a flag pattern . Although it’s too early to say if this is a wedge or a rising / falling flag, the previous two sessions are enough to set a trend line tighter to the recent price, 3.

Using this trend line , the support price for the next few day would be around $441. Using a 3% penetration level for confirmation of movement below the support level and to avoid a bear trap (a penetration level of 5% combined with a 3 day filter to account better for Tesla’s volatility might also work, however has a higher risk of reducing profit substantially if the price declines dramatically as Tesla’s is prone to sometimes doing) gives us a price of $427. Which is what I think is a good price for a balanced exit strategy/stop-loss particularly if the entry price was near the recent trough is 08 September 2020.