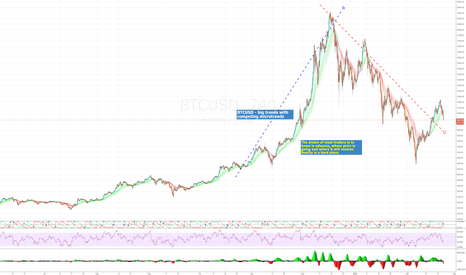 Everybody is interested to find out where BTCUSD             is going!! Well, if you only knew where it was heading you’d have an edge on the rest of the world and make loadsah money – right? Too often on Tradingview and other places – even among some so-called expert traders and trainers – I’ve heard the words, “I predict…. blah blah…“. These are the folk who claim to have some ‘greater’ insight on the future – these are the chaps and chappesses who claim to have amazing crystal balls.

Well – a majority of these folks have had their crystal balls broken by BTCUSD             , in the last couple weeks! I’m not surprised, at all. Why? Nobody owns the future. Many a trader confuses a probability estimate with the word ‘prediction’. If a probability is 60% for the north, all it means is that there is a 40% chance it’ll go south. That’s by no means a prediction. The word prediction has a specific meaning. If I predict that the sun will rise in the East tomorrow morning, I do not think anybody would be impressed by that. If however I predicted that the sun would rise in the West on 09 December 2019, that would require some looking into for foundations of evidence leading to such ‘prediction’. Note that a prediction requires a lot of specificity and a pretty well defined range of time to make it meaningful.

BTCUSD             has been a bearish market for several weeks. All the available evidence – right on the charts – show that a down trend is the greater probability. Yet many a trader/trainer has been predicting various high levels. Their so-called predictions are actually statements of speculation for the most part, given with some degree of assertiveness. The markets do not respect anybody. They do as they like.

Lots of traders find a great sense in being right – after an event happens – in what they call ‘their prediction‘ (come through). If a ‘predicted‘ event happens it seems to confirm their ‘predciction’. No – it simply happened their way by chance (and I’m not talking about luck). ‘Sense of victory’ is a thief in this business! It’ll rob you of your money in the long run. How? You come to feel that you were so right the last time, that you’d be right if you do the same thing in the future. Seasoned traders know that it just doesn’t work like that.

Note the above paragraph excludes traders who have developed a sound strategy that matches their personality characteristics, and who have a proven expectancy ratio over a long period of time across several markets.

The following is not advice (I’m sharing my personal long experience and methods):
1. I cannot predict the future – and therefore predict nothing, ever!
2. I can estimate probabilities relevant to a particular time frame.
3. For every probability that favours my estimate, there is a counter probability that I’ll be wrong.
4. I chose my trend time frame very carefully.
5. I base my stop-losses mathematically on the ATR and other tools.
6. I agree with myself to accept the loss in advance of making the entry. In other words the money is gone! It’s an accepted/acceptable loss at the time of entry.
7. I don’t know where a trend will go (being mostly a trend-follower). So, I have no targets but have exit criteria relying on mathematics.
8. I aim to become a ‘robot’ (not easy) when trading the markets. This is some protection from my inner enemies (never perfect).
9. Nobody has authority over my assessment of probabilities.
10. I do not rely on confirmations on charts, the news or opinions out there.

I do not suggest or imply that others should follow my methods. I claim no successes nor do I need to impress anyone. I believe all new traders should be helped to help themselves totally for free.