OH YES HE DID…

After Matt Lauer was fired today for “inappropriate sexual behavior in the workplace,” pinching Katie Couric’s ass and whatnot, President Trump took to Twitter to sling some tomahawks at the MSM “opposition party” today.

In addition to slamming Lauer, Trump suggested people “Check out Andy Lack’s past!”

Wow, Matt Lauer was just fired from NBC for “inappropriate sexual behavior in the workplace.” But when will the top executives at NBC & Comcast be fired for putting out so much Fake News. Check out Andy Lack’s past!

Lack is the chairman of NBC and MSNBC. Prior to that he was chairman of Bloomberg Media and CEO of Sony. Are there some skeletons in his closet? 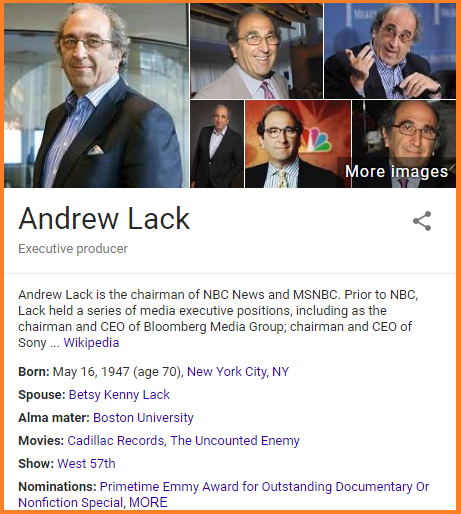 Trump then dropped another bomb on Morning Joe

One day after MSNBC Morning Joe host Joe Scarborough announced “I took down my Trump tweets yesterday after deciding my responses should be about policy and not personality,” the President dredged up the “unsolved mystery” of Scarborough’s dead intern, Lori Klausutis:

So now that Matt Lauer is gone when will the Fake News practitioners at NBC be terminating the contract of Phil Griffin? And will they terminate low ratings Joe Scarborough based on the “unsolved mystery” that took place in Florida years ago? Investigate!

The story of Lori Klausutis has dogged Scarborough on the Internet since she was found dead in his Florida district office on July 19, 2001. Although Scarborough was out of town — and the medical examiner later ruled she had died after falling and hitting her head on a desk — conspiracy theorists have long speculated, with no reliable evidence, that Scarborough could have been somehow involved in Klausutis’ death. And now the president appears to be joining in.

What’s strange, aside from the way Klausutis died, is that while the autopsy concluded that Klausutis had a cardiac arrhythmia which caused her to fall and hit her head on a desk, Dr. Michael Berkland, who performed the autopsy, was busted for a felony charge of improper storage of hazardous waste after human remains were found in a storage unit rented by Berkland.

Scarborough was never a suspect in the investigation, though he did laugh about it and say “Yeah well, what are you gonna do?” in 2003 on the Don Imus show:

In response to Trump’s tweet, Scarborough said “Looks like I picked a good day to stop responding to Trump’s bizarre tweets. He is not well.”

Looks like I picked a good day to stop responding to Trump’s bizarre tweets. He is not well. https://t.co/XJhW5ZHNfs

4D Sand in the Eyes

Make no mistake, Trump knows there’s “zero evidence to suggest that Joe Scarborough had anything to do with the death of Lori Klaustis. But the story of Klausutis’s death has nevertheless haunted Scarborough over the years,” as Gawker wrote.

That’s not the point… Keep in mind that Trump, at the end of the day, is an expert shitposter – triggering the left at the drop of a tweet. And with Scarborough’s announcement yesterday that he’s not going to comment on Trump anymore, I think it’s a near certainty that the President decided to test ol’ Joe’s resolve.

And look at the headlines… is any real news being reported today? Of course not – the MSM and new media (Twitter, Facebook, Reddit, etc.) are in full meltdown Lauer’s firing and Trump’s crazy tweet.

CNN anchor Jake Tapper chimped out over Trump’s dig at Scarborough, calling the attacks “indecent” and “attempting to exploit the tragic death of a young woman.”

This is the president attempting to exploit the tragic death of a young woman — one who had heart problems and hit her head when she fell — to score a cheap spurious political point. Indecent. Inhumane. https://t.co/UAvbhYPCnQ

And that’s how you wag the dog…