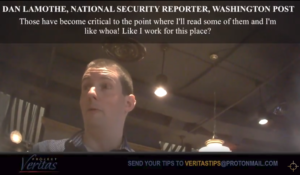 Hours after the Washington Post ‘busted’ Project Veritas for trying to trick the paper into publishing a fake Roy Moore accusation, PV founder James O’Keefe released a new undercover video featuring WaPo National Security reporter Dan Lamothe admitting that, shocker, WaPo reporters “definitely don’t like Trump,”and that the paper’s “institutional voice,” or “opinion from God“ publishes hit pieces against the President that are so beyond the pale that Lamothe can’t believe he works for the paper:

PV Journalist: “So they just like, rip on him?”

Dan Lamothe: “Those have become critical to the point where I’ll read some of them and I’m like whoa! Like I work for this place?

Lamothe – who seems like a nice guy that’s genuinely interested in reporting facts – goes on to say that while journalists cover Trump more fairly (“they also give him credit where there’s credit”), the ‘institutional voice’ of the paper is trying to “educate people but with a point of view.” “It’s, like, a very different mission” says the National Security reporter.

When asked about the Washington Post’s bias, Lamothe says that while the paper is “right on the story,” they’re “spending a lot of emphasis on this or that,” meaning that the Jeff Bezos owned outlet will spend a disproportionate amount of time spotlighting stories which might make President Trump look bad, or what he’s tweeted.

“it sucks so much oxygen out of the room. It’s just so much emphasis on what he said and what he tweeted,” Lamothe said, adding “I can’t tell you how many times we get an email at work: “Oh did you see what he (Trump) just tweeted? What are we gonna do about it?””

NYT and CNN are worse?

Another Project Veritas undercover operative recorded Joey Marburger, Director of Product for the Washington Post, admitting that Trump is a primary driver of traffic to the publication.

“If Trump just disappeared tomorrow, our traffic would drop by forty percent. So, yeah, we think about that.” –Joey Marburger, WaPo

So what have we learned?

-Most WaPo reporters hate Trump but try to report honestly, according to Dan Lamothe, giving the President “credit where there’s credit”

-CNN and the New York Times are way worse, according to Lamothe

-Without Trump, WaPo’s traffic would drop by 40%